I voted pre-made kit but, I meant the MadTooler kit. It look really good. I will try to find time to see if I could print it and how long it takes.

Ideally the “jaws” would only be in contact either when the robot is pickup up and they simply work as retainers, or when a major obstacle is hit at high speed. If the area of contact is too short, it could have a catch or hiccup. If the area is wider than the dimple, it will skip over easily. Only a trial will show for sure.

Then next closest ball I found are 1.5" polypropylene balls used for check valves. They are not solid, but fairly strong and cheap. I had considered super balls, but they have too much grip. Surely there are more options, but I feel pretty good about the odds the golf ball will be better than acceptable.

If there is enough response with interest in making this version, I will push further with a full prototype.

For a printed ball caster, I would try to modify the design to capture the ball and support the rollers something inbetween these two: 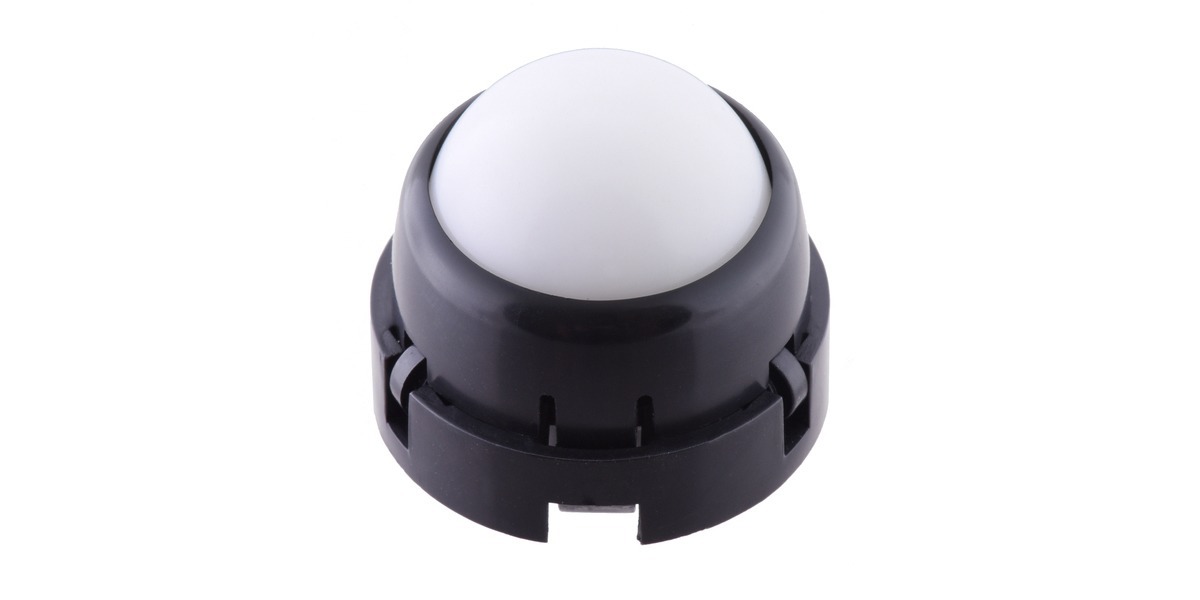 This ball caster uses a 1″ diameter plastic ball and has an overall height of 1.1″ (29 mm). The two-part housing snaps together to securely enclose the ball and three plastic rollers that reduce the friction between the ball and the ABS housing. ... 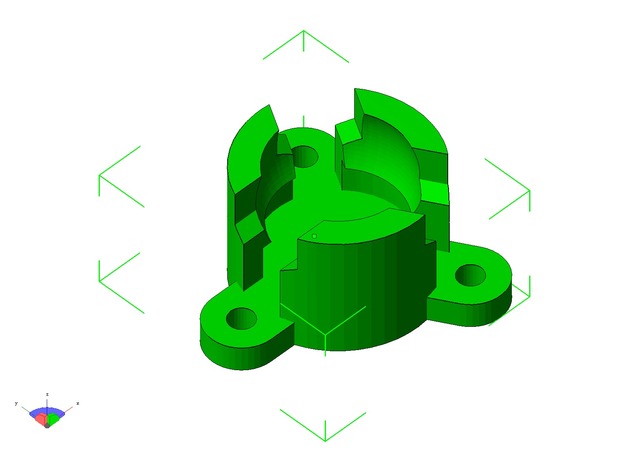 This is a simple caster redesigned for a robot I'm making, The caster uses a 16mm marble for the ball. changes is from two fixed position to three fixed position.

I would also still use bought nylon rollers for maximum smoothness instead of printing them.

FYI, not that I am saying it is the best application here, but if I were to cut these on my gantry CNC, it would probably take about a minute each if I was running really slow. How long would it take you to print one?

BTW, I think that Pololu caster looks fairly decent. It is not as nice as the made in USA ball casters I use in my Gobbits (https://www.amazon.com/Hudson-Bearings-Machined-Transfer-Diameter/dp/B00EPLJGAK/ref=sr_1_1?ie=UTF8&qid=1544497904&sr=8-1&keywords=mbt-5%2F8), but it is larger and probably more flexible in mounting options. Even so, I still would prefer to make the golf ball version to achieve even more ball clearance (about 5/8"), maybe more rugged, and from my searches, novel.

If you click “Hide Results” under the poll, you can the change your vote.

Cura estimated between 2.5-3 hours for printing the caster. ~5 hours for caster plus motor mounting brackets/side panels.

I’m going to try printing it out plus the side mounting slots today.

For my own uses, printed parts are probably fine, but for the club, machined parts would probably work and look a lot nicer.

I’m trying to find 3.3v sensors to work with the ESP and I’m having a lot of trouble. Currently, the majority of inexpensive sensors I’m finding are designed to work at 5v. The primary issue at the moment is that I can’t find a good alternative to the HC-SR04 Ultrasonic Sensor.

Unless someone can find an alternative sensor, I’d seriously recommend changing from an ESP to a normal Arduino Uno like this one: https://www.microcenter.com/product/486544/uno-r3-mainboard

This one is similar per adafruit:

If you're like me, you've dreamed of being a dolphin - smoothly gliding through the water. Using your echo-location abilities to detect tasty fish treats. Until genetic modifications ...

Have you tried any I2C sensors?

That seems like a good option but a little on the high side price wise. I’d really put the limit at $4 per sensor if possible. The Adafruit SR04 seems good if it doesn’t have the out of range lockup bug. https://www.adafruit.com/product/3942

As I understand, some versions of the sensor will come out of lockup if they get a pulse on the echo pin. If the bug didn’t exist, the voltage difference wouldn’t be a problem to me because then the MCU wouldn’t have to fake a sensor activation and only need a divider rather than a bi-directional voltage change.

If similarly priced alternatives to the SR04 existed, I’d pick them. I’d consider using IR Receivers with an LED, but the issue I see is that we have only one analog pin to work with. If we used a different MCU with more analog inputs this wouldn’t be an issue, but often those are 5v tolerant so this whole thing would be a moot point anyway.

I looked at I2C but I can’t find any distance sensors that are reasonably priced for this project.

If we are to build the bases I drew, the robots are already a few dollars over the tiny budget with me giving away my materials and machining. There isn’t any room for additional stuff.

The sensors should probably move to a new thread. It would also help if you came up with some parameters of operation to guide responses.

I’d hate to lose the wifi connection. The srf04s are only 1 dollar. I think we could just use 2 10k resistors and go with that and live with the bug. Sensors are not a critical feature anyway just a nice to have. We can upgrade in a future session.

So I tried 3D printing the parts. They work without modification but the clip parts are weak with my poor printer tuning and non-ideal printing orientation. Coincidentally, they work fine with TT motors.

The primary part I was interested in printing, the golf ball caster, printed as one piece acceptably.

You could print these on a better printer with a better tuning and get much better results.

My attempt at making slots was really horrific but works fine as a rough prototype.

I would much prefer the slotted 2D parts as machined parts rather than printed. I don’t think it matters much for the golf ball caster. The main advantage I see from printing the caster is that less assembly is required. 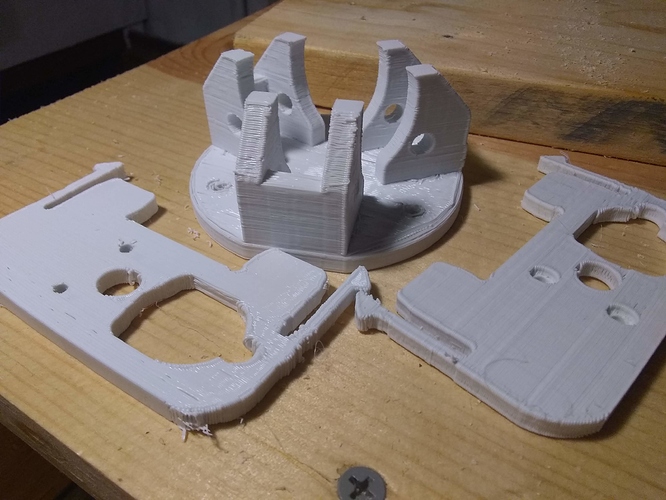 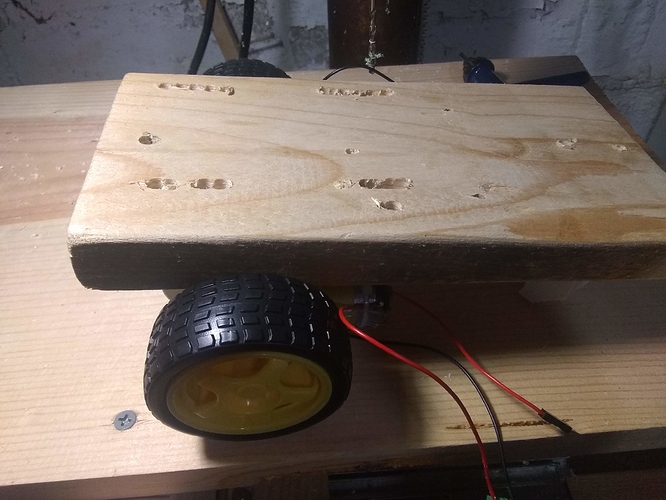 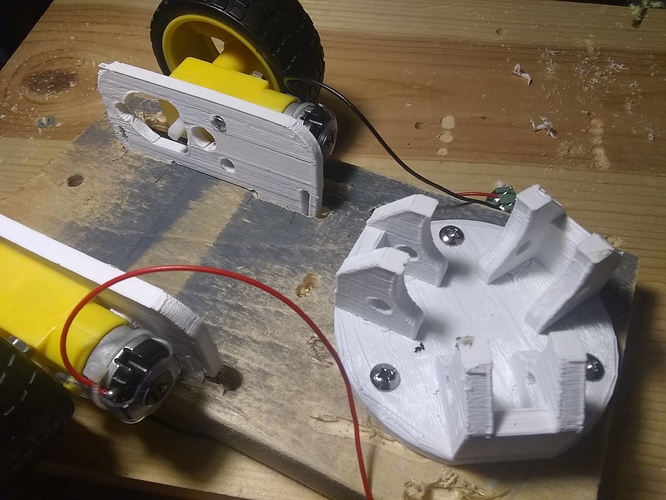 I ordered this pack of SR04 sensors: http://a.co/d/gNLiOHy
I’m going to experiment with them when they arrive. I think I have a way around the voltage level issue and out of range bug at the same time without a level shifter.

Josh, I would consider sensors a vital feature of any robot. I see the WiFi as a nice extra feature that we can afford to lose. I’m more concerned about the I/O imitations because it’s really easy to eat up all the I/O on a controller with sensors and actuators. The other concern I have about 3.3v only is that someone could buy a 5v sensor and expect it to just work out of the box without damaging their chip if they were new to this and forgot about the imitations.

My servos arrived and I’m going to see how well they work on my prototype platform.

The snaps were designed for 1/2" material. They will not work to retain with 3/4, only as resistance. If you drilled a relief on the top side at the snap, it could allow it to function as designed. I would also print them flat with the “grain” of the printed material oriented along the flex for strength, not perpendicular.

There are slots on one side of the motor mounts that work to capture the nut if you run the screws in from outside. They were sized for M2.5 nuts. Not sure what size you have there or if they would still fit in the printed version.

For the caster bracket, it is interesting to see it, and curious if it fits the ball, but I would make lots of changes to make it a print version. Do you have a ball to test fit?

As I have mentioned before, we should declare the current goal of the robot to define what sensors and the physical build of the base. Future goals would also be great, even if simply wish list, to help choose final configuration and choice between build or buy.

For example, if this goal is to make a wifi remote control, which I thought was the plan, esp12 makes sense. It also gets those that are less capable of programming more interactive from the start. Of course, the programming behind getting them there is far more complicated if they are to actually write the code vs. simply uploading an example. The only suggestion I might make here is to go with the newer esp32 for the massive increase in IO and capability. Of course, the extra $2 per board would be another inflation.

As for 3.3 vs. 5, most new sensors are 3.3v. I personally like 5, but it is a fight against the system to cling to it. You are already having to pay extra for new components that have level shifting built in just to avoid the newer 3.3 normal. Easier to get on board now then double down on the old in my opinion.

I’m a bit confused on our goal at the moment. Are we trying to make a WiFi remote controlled toy or a robot? Right now I’m trying to design a robot with unknown future use in-mind.

I’ll still design around 3.3v since that’s the consensus of what we want, but I’m finding it a hassle.

I figured they wouldn’t work well with the thickness, but I wasn’t really planning on testing the snap system as I expect it to work since you’ve had experience with it.

Unfortunately the weakly printed snaps snapped in half. If I was printing for strength, I would have printed them lying flat with 100% infill. For the sake of speed and fitting more parts on the printer, I printed them standing up with 20% infill at the same time as the ball caster. What I need to do is get a magnetic flexible build plate before I print them lying down because otherwise I damage my bed grip material when removing flat parts because of how well flat parts stay on.

I’m using the nut capture as a screw head countersink.

I do not have a ball on hand for testing. I also need to pick up some rollers and associated hardware.

Jason, what’s a good place to get the expanded PVC and what do they list it under?

For the club, I was going to get it from my scrap material rack.

The material I use is Palight board. That is what was in your second link. Looks like HD only sells 6mm. Not sure about their 1/2" board. I do not buy it from them since they are SUPER expensive and not what I have found to be reliable on stock when I need it.

There are numerous sign and plastic suppliers in St. Louis. Some of them sell direct, but most prefer or only sell to business. They also tend to have minimums that you wouldn’t like for a single part. To keep it simple for the club, my business can be the source.

BTW, the wheels on those TT motors are smaller diameter than the wheels I suggested using in my design. They will not match the height of the golf ball without modifying the motor plates.

For my design I want to keep it as mostly off the shelf parts and material sources, so I’m going to stick with wood. I’m giving an exception to 3D printed parts because of the number of people and public places such as libraries with 3D printers. I assume that other club members with 3D printers would be willing to help provide some of the parts if I’m unable to.

Is there an official decision on the short vote?